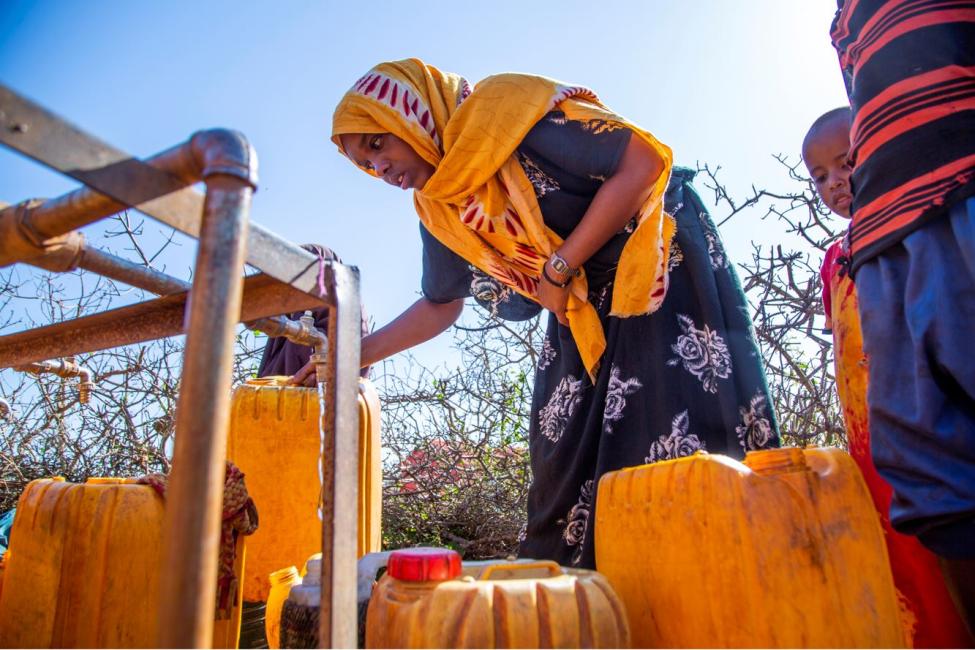 Mogadishu – A new EUR 6 million agreement between the International Organization for Migration (IOM) and the European Union will help populations in Somalia adapt to climate change while addressing conflict arising from competition over increasingly scarce resources.

Erratic weather patterns, including droughts and floods, are intensifying across the country that faces the risk of its fourth consecutive failed rainfall season in the first half of 2022. Deforestation, overgrazing, soil erosion and desertification, further exacerbated by poor agricultural and pastoral practices are also leading to the degradation of the environment.

These events are pushing thousands of people out of their homes and increasing the competition over access to grazing land and water each year. Pastoralist and rural communities who depend on natural resources for survival are especially vulnerable.

IOM’s latest Displacement Tracking Matrix analysis shows that deteriorating drought conditions in Somalia could displace over 1 million people by April if urgent action is not taken.

The project will target communities in Galmudug, a state in central Somalia where the adverse impacts of climate change are contributing to the increasing risk of violent conflict.

“This project’s unique approach will not only contribute to the stability of Galmudug, but we hope will also have a positive impact in other parts of the country,” said Danziger.

The consequences of climatic shocks also pose a serious threat to sustaining peace in Somalia, whose populations have suffered over three decades of protracted conflict.

“Extremist organizations also continue to exploit inter-clan grievances and use the climate crisis to their advantage,” Danziger said.

The IOM-EU project aims to provide lasting solutions to build the resilience of Somali communities and prepare them against climatic shocks. It will also bring stability in an area where communities have historically confronted one another for control over diminishing natural resources.

For 18 months, IOM will promote community-driven solutions aimed at mitigating natural hazards and environmental degradation – two known drivers of forced displacement and conflict – with a particular focus on investments in water access and management. Rural communities in Galmudug will also learn about environmentally sustainable practices and how to mitigate tensions linked to resource distribution.

Throughout the project, IOM will collect data on transhumance movements, and work at the community level to build social cohesion and identify solutions to natural-resource driven conflict.

IOM has a long track record working with the Government of Somalia to deliver durable solutions to displacement while supporting Somali populations to be at the centre of their recovery amid a changing climate.

IOM's Global Crisis Response Platform provides an overview of IOM's planned activities and funding requirements to respond to the evolving needs and aspirations of those impacted by, or at risk of, crisis and displacement. Click to view the 2022 Crisis Response Plan for Somalia.

The project is funded by the EU through its Global Europe - Neighbourhood, Development and International Cooperation Instrument (NDICI).